Tuesday, November 19, as part of the campaign "I love my body , I love my rights", held at the Université Laval in Quebec City, a conference was organized by the Committee Amnesty International of the Faculty of Law. The organizers chose the still taboo theme excision, a subject that is not spoken of, but yet leaves millions of women and girls injured for life.

They invited André Gaumond, Raelian filmmaker, to present his film "Excision , an evil that still hurts" and Aminata and Habibata, two young African women who have undergone female circumcision, to share their experiences. It was an emotional evening. 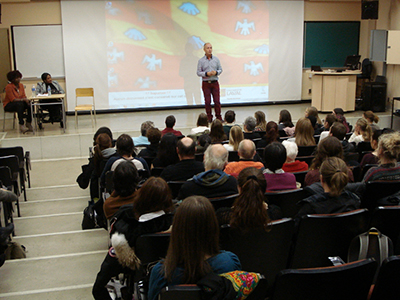 First, Andre's film reveals a facet of excision that is not visible, the horror lived by  these women who are circumcised, the trauma remains throughout their life. Through the testimonies of circumcised women and doctors, the film sheds light on so many social wounds that remain in the lives of millions of women, as female circumcision is more than amputation of a small piece of flesh, it's the amputation of dignity and self-confidence.

Aminata, who participated in Gaumond's documentary, experienced circumcision at the age of 6. Already affected by polio, she underwent a second handicap through excision. But just like other females both young and old, she did not speak about it, because we do not talk about circumcision. It is normal to be circumcised. It is only as an adult that Aminata realized that excision is not normal when a woman from her village could not have sex on the night of her wedding night, because of the excision. The husband could not penetrate her. They brought the gynaecologist, but he could do nothing. They even brought in the circumciser to remedy the problem. The husband was asked to penetrate her in the following day so the wound would not close. This is when Aminata realized all the evil that circumcision causes. She decided to talk, never be silent, because circumcision is not normal.

Habibata was also excised at 6 years of age. She was taken by force and they cut her clitoris with a razor blade. She cried. She bled. It was painful and pain has always remained in her body and in her heart. When she was with other young women and they were talking about sexuality, about their experiences, she could not say anything, she felt left out, because she did not know the sensations her friends were talking about. She had nothing to say. "Female circumcision is not limited to the clitoris, it also cuts something in your head, it takes away self-confidence," she said. When she learned that a technique was developed to repair the clitoris, she decided to restore her clitoris in order to witness to other circumcised women and say, "It works!". This simple decision, however, has not been so easy, everything was confused in her head. At each step, she relived her circumcision, again and again. Before the restoration of her clitoris, she first had to treat the psychological scars from the excision, but she had the courage to go through it. Then, three months after contacting Clitoraid, she went to San Francisco to meet Dr. Marci Bowers, to undergo surgery and to repair her clitoris, great hope for all circumcised women to regain their dignity!

"Although there is still a lot of social and legal work to do to counteract FGM, there is hope" it's on this note that law professor Louise Langevin, concluded the evening, as she presented the legal the developments that are occurring internationally to fight against this extreme violence done to women.